On 15 February the High-Level Group on Energy-Intensive Industries held a public conference hosted by the European Commission Vice-President, Jyrki Katainen and the European Commissioner for Industry, Elżbieta Bieńkowska. The conference focused on the most relevant issues and challenges for energy intensive industries and gathered a range of stakeholders from the various sectors, as well as producers, end-users and trade unions. The conference was concluded by statements from UK Minister of State Anna Soubry, French Minister Emmanuel Macron and Dutch Minister Henk Kamp.

“With one third of production exported outside of the EU, the ceramic industry is very exposed to international trade,” Dr Scheuch highlighted in his opening statement. “We appreciate the European Commission’s efforts to help grant us access to other markets as the ceramic industry is confronted daily with 100 technical barriers to trade.”

ON CLIMATE AND ENERGY

“European industry faces burdens that other countries do not, including 30 to 40% higher energy costs and the Emissions Trading System. If we want to keep market leaders in the EU there is clearly a need to secure a level playing field,” Dr Scheuch stressed.

To avoid the risk of carbon leakage and encourage investment in energy efficiency, the ceramic industry firmly maintains that best installations from all energy-intensive industries should receive 100% free allocation. 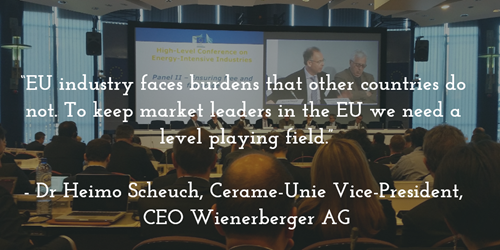 “The ceramic industry, 80% of which is composed of SMEs, appreciates the European Parliament’s efforts to modernise Trade Defence Instruments keeping small and medium-sized companies in mind.”

The European ceramic industry calls on the EU to maintain and improve the efficiency of TDIs, particularly for SMEs. However, unilaterally and prematurely granting Market Economy Status to China would entirely undermine the effectiveness of the EU’s anti-dumping tool and endanger 100,000 ceramic jobs – half of all ceramic jobs represented by Cerame-Unie.

Dr Scheuch gave a striking picture of what could happen to EU industry without anti-dumping measures: “In 2004 Chinese tableware had a market share of 22% in Europe. By 2011 this grew to 70% and it cost the European tableware industry over 30,000 jobs. Once the EU put measures in place the situation became stable again.” 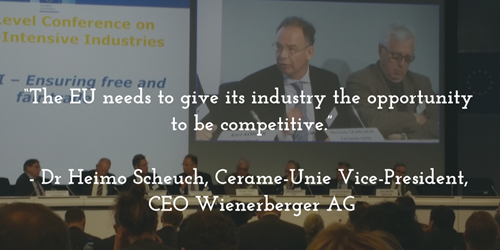 In his concluding remarks he stated, “It’s not only about trade policy but about the EU having an industrial policy that gives its industry the opportunity to be competitive.”

More information can be found on the Commission website. Watch Dr Scheuch’s speech in the following video at 1:32:45; his comments in the subsequent discussion are at 2:21:00.