The French Federation of Roof Tiles & Bricks (FFTB) contributes to several initiatives in the construction and rehabilitation of social housing in the region of Essonne in France.

Five affordable homes in the town of Lardy were inaugurated on 28 September 2015 in the presence of the Fondation Abbé Pierre, who partly financed the construction under the “Roofs First” programme, the association leading the project Solidarités Nouvelles pour le Logement, and the FFTB. 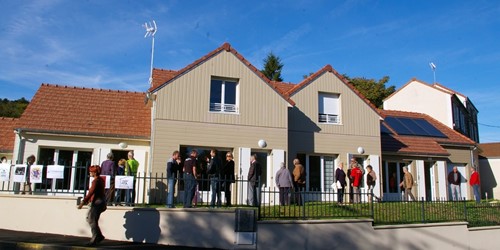 This project was born in 2011 from the willingness of the inhabitants of Lardy and Janville-sur-Juine to promote social housing at a local level. Members of FFTB contributed to this project by providing all the tiles for the roofs. This initiative offers those in need – low-income workers, persons without income, single mothers fleeing unsafe or violent environments – an affordable place to live.

Further projects are planned for 2016. The partnership between the FFTB and the Fondation l’Abbé Pierre will result in the construction of a  boarding house in Hérault as well as the restoration of a building in Auvers-Saint-Georges which should yield seven affordable homes for those in need.

find out more (in French):