The European Ceramic Tiles Manufacturers’ Federation (CET) held its annual congress in Còrdoba from 15 to 17 June 2017.  The CET Congress 2017 was hosted by ASCER, the Spanish Association of Ceramic Tiles Producers.  The congress was attended for the first time as full CET members by representatives of the Polish Ceramic Union which joined CET in January 2017.  The General Assembly discussed key regulatory developments in the fields of trade policy, energy and climate policy, environment and health and the internal market for construction materials.  Extensive discussions were held concerning the ongoing EU legislative process to review the anti-dumping methodology as it is of utmost importance for EU manufacturing that this review does not lead to any weakening of EU Trade Defence Instruments.  The General Assembly also provided CET members with an update on the ongoing Anti-Dumping Expiry Review on ceramic tiles from China launched by the European Commission on 13 September 2016 and which will be completed by 18 December 2017.  CET members fully support the ongoing review in the light of the risk of recurrence of injurious dumping notably due to the high unutilised production capacity in ceramic tiles in China representing 4 times the EU consumption. 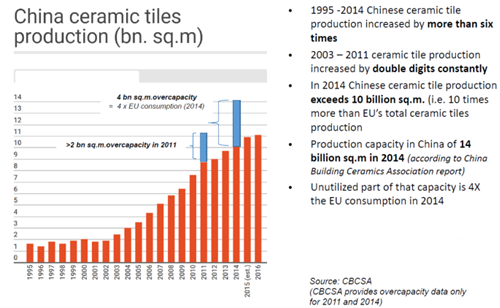