16 July 2019, Brussels – the European Federation of Ceramic Table and Ornamental ware (FEPF) welcomes the adoption of Regulation (EU) 2019/1198 implementing a definitive anti-dumping duty for another period of five years on imports of ceramic tableware and kitchenware from China following a thorough expiry review. The expiry review investigation established a clear risk of continuation and risk of recurrence of injurious dumping and found persisting and significant distortions in the Chinese market in this sector.

FEPF understands that the conclusions of the Commission on this expiry review were discussed at the Anti-Dumping Committee of 12 June 2019 and that a large majority of EU member states supported the renewal of the anti-dumping duties for a period of five years.

These fair findings, obtained following a year of thorough investigation by the Commission, fully support and confirm the prima facie evidence and allegations presented by the Union industry in its request for an expiry review, which were confirmed by the Commission and thus duties are now maintained. The investigation notably confirms the continuation of ongoing dumping and the presence of a growing and huge unutilised Chinese production capacity representing a multi-fold of total EU consumption. In addition, most key export markets for China have introduced anti-dumping measures on imports from China or are in the process of doing so. Such measures in third countries would result in a redirection to the EU market of dumped goods from China, thus exemplifying the significance of today’s decision to renew duties for an additional period of five years.

The investigation demonstrated that the market share of Chinese imports remained relatively stable at over 56% during the investigation period. The market share of the Union industry has been maintained at around 30% and the employment of over 26,000 workers has been safeguarded thanks to the level-playing field afforded by the anti-dumping duties implemented in the last five years. Today’s decision to renew the duties will ensure the continued competitiveness of Union industry against illicit and unfair trade practices from abroad.

However, Union production, capacity, and employment, although increasing, are still not at the level achieved before the start of the original investigation in 2012. In the period of 2004-2011 alone, China tripled its market share from 22% to 67%, whilst the Union industry lost more than 33,000 skilled jobs, affecting more than half of the EU jobs in this sector and a plethora of indirect jobs across the value chain. In addition, profitability remained well below the 6% target profit that was considered acceptable in the original investigation. 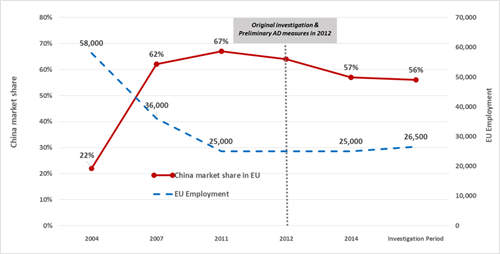 FEPF salutes the renewal of duties for another period of five years. As stated by FEPF President Roberto Sala – “In the context of ongoing unfair trade practices, including persistent dumping and unprecedented circumvention of EU anti-dumping measures, today’s decision is a very good signal for the Union industry, which is exposed to a continued threat of injurious dumping from China. Our industry provides over 26,000 high-quality and skilled direct jobs in the EU and keeps the manufacturing and investments within the EU.”