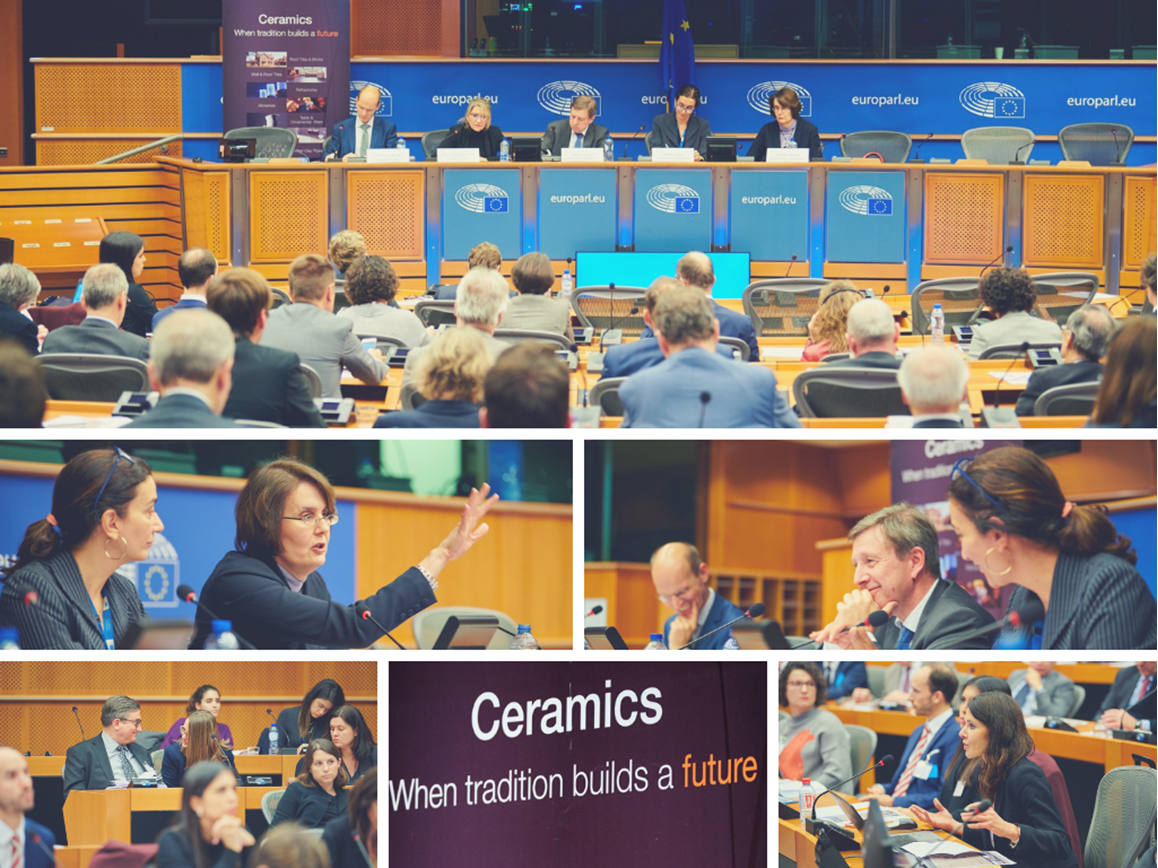 The two-day event began with the 19th annual meeting of the European Parliament Ceramics Forum (EPCF), chaired by EPCF Chair Inmaculada Rodríguez-Piñero Fernández MEP in the European Parliament. The EPCF brings together Europe’s most influential parliamentarians and policymakers with representatives from the industry to exchange on the most salient topics affecting both the industry and wider Europe.

At the 19th EPCF we welcomed the following esteemed speakers to address MEPs, CU members, and other invited EU officials on the topics of trade, climate, and research & innovation.

Inmaculada Rodríguez-Piñero Fernández MEP, Chair of the EPCF, welcomed participants and opened proceedings. Ms. Piñero MEP called for an ambitious EU Industrial Strategy to support industry critical to Europe's future such as the ceramics industry. Ms. Piñero MEP acknowledged the importance of the European ceramics industry as a world leader in fields such as climate action, innovation, and in particular, trade.

Sandra Gallina, Deputy Director-General of DG TRADE, spoke on a wide array of salient trade-related issue in the context of an increasingly turbulent global political environment. Ms. Gallina noted that despite such troubling global developments, the European ceramics industry stands out as a “true trade champion”. Ms. Gallina praised the industry for its steadfast commitment to free trade through its active support of the EU-Canada and EU-Japan agreements as well as its support on a plethora of other free trade agreements. Ms. Gallina also commended the work of Cerame-Unie, the industry’s voice in Brussels, as an active participant in dialogue and co-operation with DG TRADE on EU trade matters. Ms. Gallina also spoke on matters of trade defence and acknowledged the obstacles facing the industry in the form of illegal trade practices from abroad. Ms. Gallina closed by addressing the issue of WTO reform and other multilateral trade issues.

Beatriz Yordi, Director of European and International Carbon Markets at DG CLIMA, spoke on the recently published European Commission  Communication “A Clean Planet for all” on the EU's long-term strategy for greenhouse gas emissions reductions. Ms. Yordi underlined the importance of industry in the decarbonisation process and acknowledged the challenges of the industrial transformation in view of achieving a carbon neutral Europe. Ms. Yordi thanked Cerame-Unie for its active participation in the compilation of the VUB/IES study on the contributions to the EU’s long-term climate strategy of energy-intensive industries. Ms Yordi also addressed the numerous other initiatives that the European Commission is developing towards net zero emissions Europe.

Jürgen Tiedje, Head of Unit in Advanced Manufacturing Systems and Biotechnologies at DG RTD, addressed our audience on the topic of research and innovation and explored the development of the future framework programme 9 "Horizon Europe". Mr. Tiedje noted that Horizon Europe would provide real opportunities to support and foster industrial innovation and he praised the role of PPPs, such as SPIRE.

A Q&A round from the floor followed each speech. 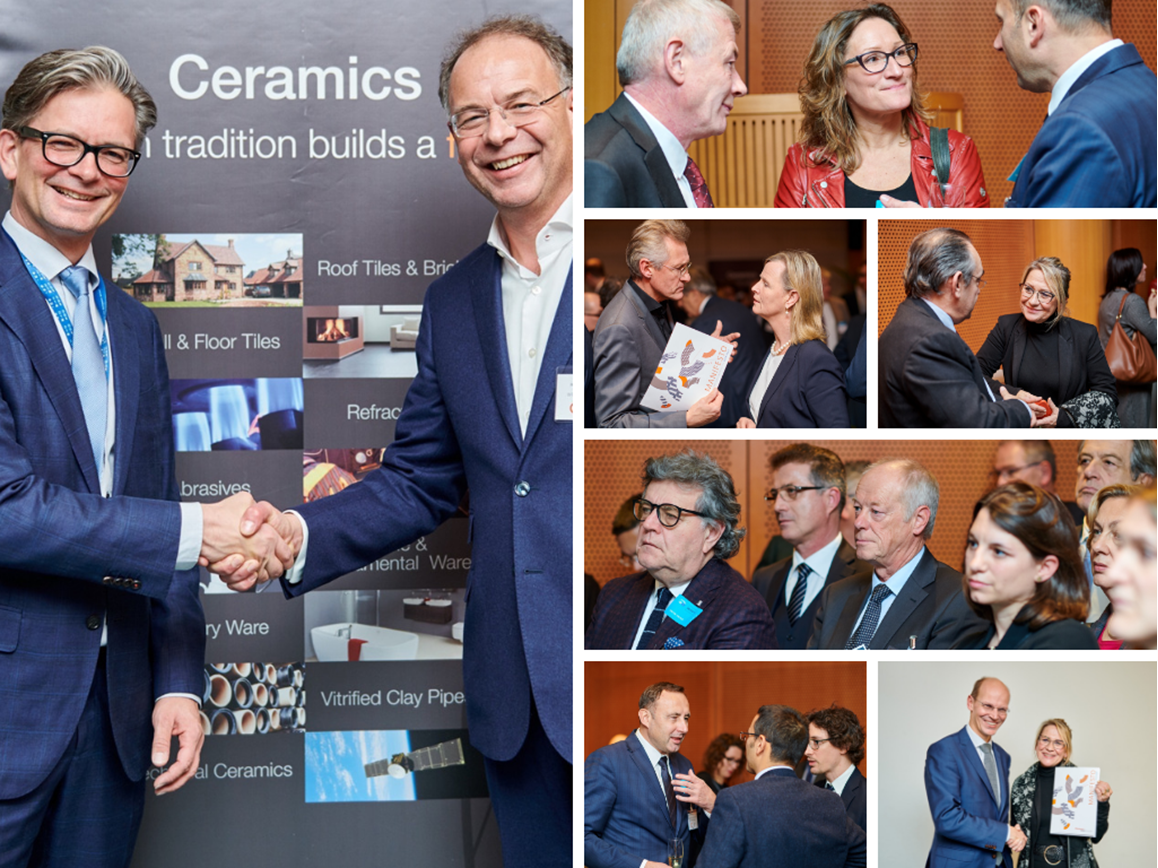 Alain Delcourt, President of Cerame-Unie, and Heimo Scheuch, Vice-President of Cerame-Unie and CEO of Wienerberger AG, addressed participants thereafter. President Delcourt began by emphasising the first point on the manifesto, the call for an ambitious EU industrial strategy. President Delcourt then gave a brief overview of the Cerame-Unie Manifesto 2019-24, paying particular attention to climate, sustainability, and research & innovation. Vice-President Scheuch developed on the need for an ambitious EU industrial strategy and stressed the need for comprehensive action addressing the lack of skilled European workers and a robust research and investment framework at the EU level.

The event closed with a networking cocktail during which several MEPs and other officials exchanged with industry representatives on the Cerame-Unie Manifesto 2019-24 and the salient issues facing the European ceramics industry.

The second day of the European Ceramic Days 2018 began with the Cerame-Unie General Assembly at which Cerame-Unie members took stock of actions conducted in 2018 and exchanged on the key priorities for 2019. 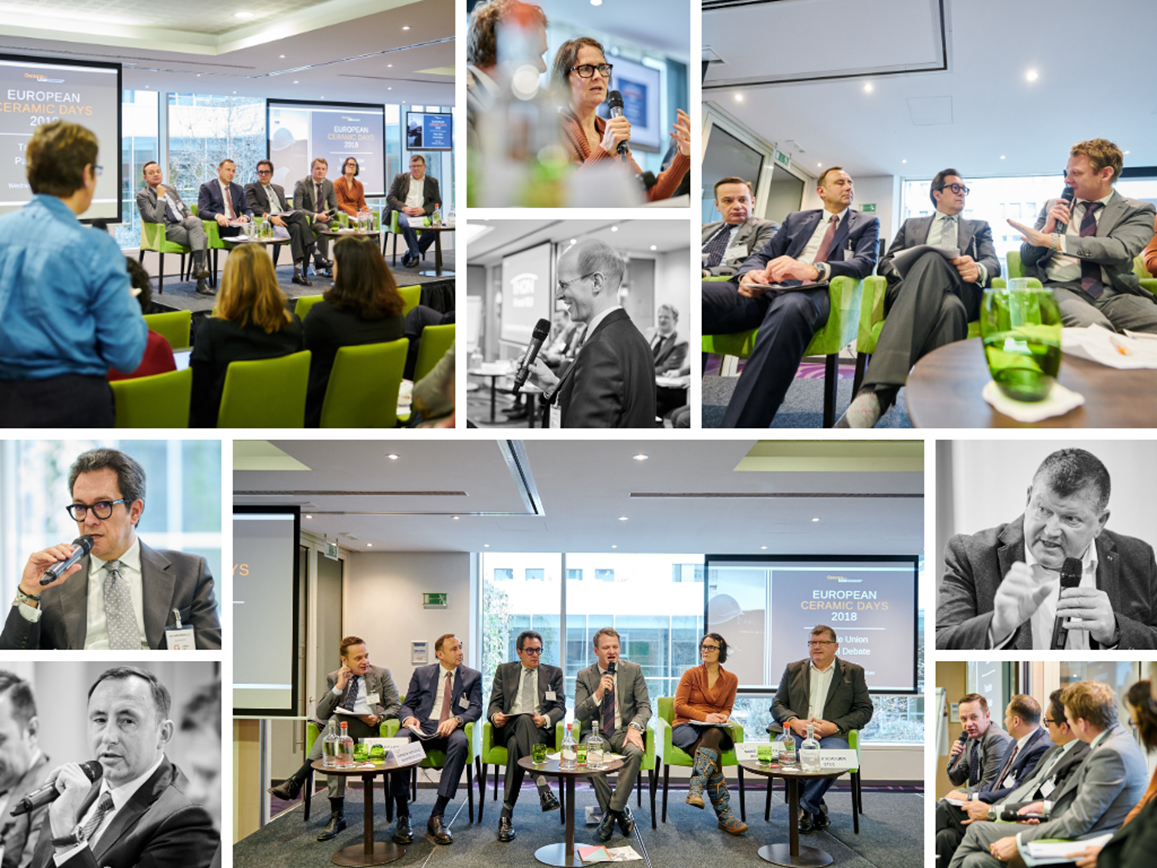 Following the General Assembly, participants and invited guests were treated to an insightful panel debate between industry representatives and trade union officials. Appearing on the panel:

The panel debate opened with statements from the three industry executives on the future of the ceramics industry and the key priorities going forward. Trade union officials reacted to industry’s statements and gave their perspective. The bulk of the session was then taken up with a discussion and debate on solutions to the common challenges facing industry and trade unions, whilst exploring avenues for prospective co-operation. The panel closed with questions from the floor during which time Cerame-Unie members exchanged with trade union officials on the key issues facing industry.

The panel debate provided important insights between the convergence and divergence of interest between industry and trade unions. Panellists and industry representatives in the room agreed that one the most pressing issues requiring action at the EU level is the growing European skills gap. Pressing forward with meaningful climate action was also highlighted as top priority by both industry and trade union panellists as an area in which more collaboration is wanting. 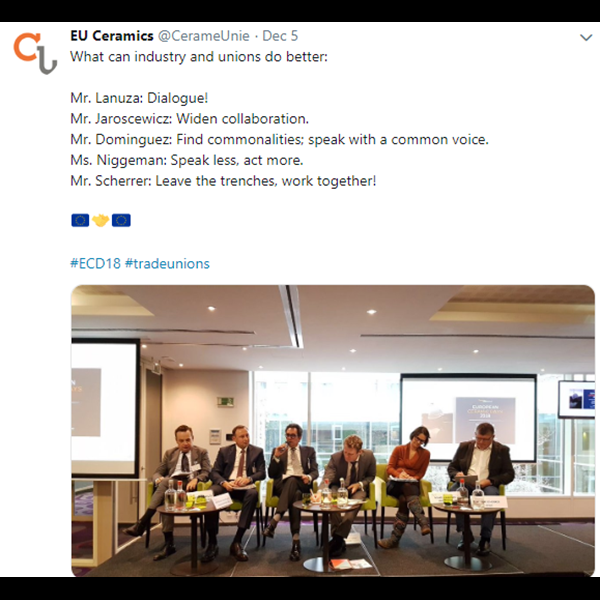 Mr. Stevens closed the panel with the following statement:

Drawing from other sectors, instrumentalising collaboration in the pursuit of direct goals focuses minds and messages. In moderating today’s debate it is clear that this is vital for better co-operation between industry and trade unions. 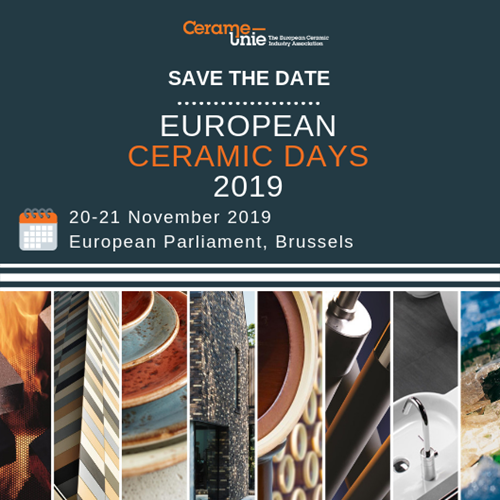